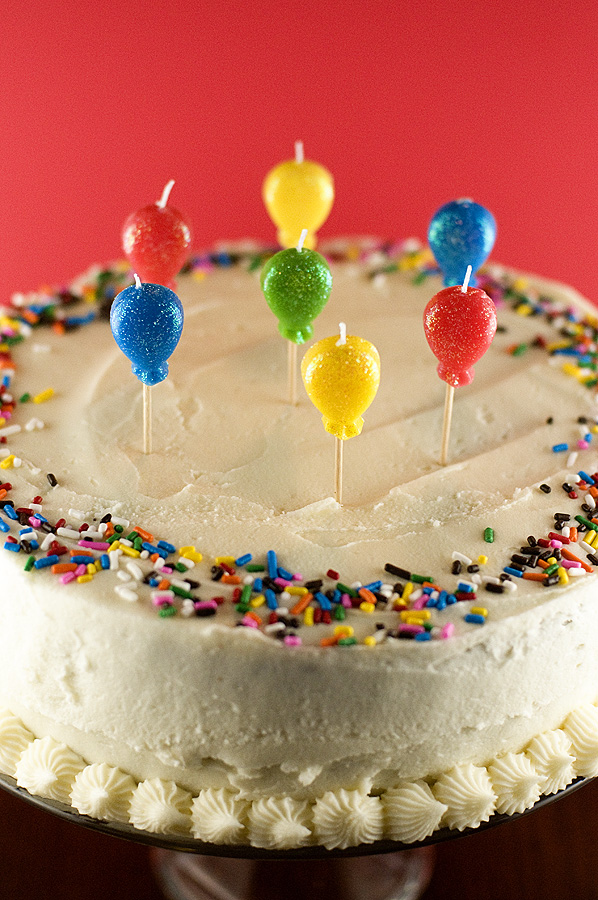 My sweet friend Azin had a birthday at the beginning of June. I made her a funfetti birthday cake from scratch because a) I heart Azin b) I love making birthday cakes and c) I always love a reason to generate blog material! I’ll never forget the night I made this cake, because I had to stop during the middle of it because of a tornado warning. Gotta love the midwest and its summer storms, green skies, and trips to the basement. When the cake was finished, I cut an enormous piece out of it so I could photograph the inside of the cake. Azin proclaimed that she was going to eat the entire piece and I told her, “I think you’re gonna regret that decision…” Sure enough, while the cake was delicious, she lapsed into a crazy sugar coma and passed out on my couch for about 2 hours. Cake is not to be messed with!

1. Preheat oven to 350F. Lightly grease two 9-inch round cake pans.
2. In a small bowl mix the egg whites, 1/4 cup milk, vanilla and almond extract. Set aside.
3. In the bowl of a stand mixer mix the cake flour, sugar, baking soda, and salt. Mix for 30 seconds or until well-combined. Add the butter and shortening and mix for another 30 seconds, or until well-combined with the flour mixture. Pour in the remaining 3/4 cup milk and continue mixing on medium speed for about 3 minutes. Scrape down the sides of the bowl.
4. Gradually pour in the egg white mixture, mixing for 30 seconds after each addition. Mix for one more minute. Gently fold in the multi-colored jimmies.
5. Divide the batter evenly between the prepared cake pans.  If baking four layers, bake for 18 to 20 minutes, or until the tops are slightly golden and spring back when pressed. If baking two layers, bake for 25 to 30 minutes.
6. Remove from the oven and place the pans on baking racks to cool for about 10 minutes. Turn the pans over onto the rack. Flip the cake layers over and let them cool completely before icing.

Place the butter in a large mixing bowl. Add 4 cups of the sugar and then the milk and vanilla. On the medium speed of an electric mixer, beat until smooth and creamy, about 3-5 minutes. Gradually add the remaining sugar, 1 cup at a time, beating well after each addition (about 2 minutes), until the icing is thick enough to be of good spreading consistency.