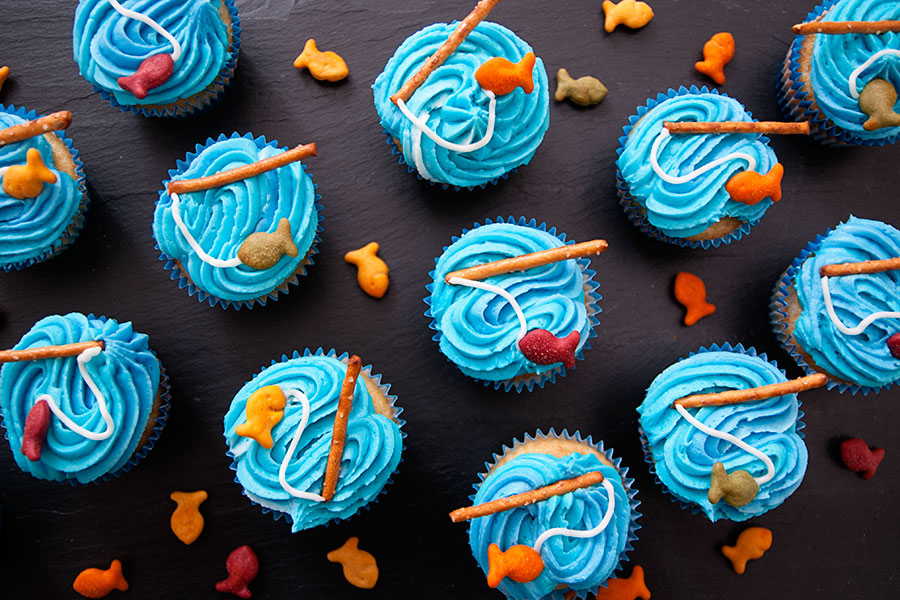 August is TOMORROW, you guys! I’m not ready! August pretty much means that summer is winding down and that school will be starting again soon (boo; but also yay! Because I’ve only got one more year to go!). August is also the month where you try to do everything summer-ish you’ve procrastinated away until now. If you don’t have the time to take your kids fishing, make these cupcakes instead!

I’m trying to make more boy-themed treats (though trust me, I know that girls can and do enjoy fishing). I’ve had an overdose of Disney princesses lately, so I’m making an effort to go in the other direction for a while. These fishing cupcakes were so easy to do — I hope you give them a try!

1. Make your batch of cupcakes and allow them to cool entirely.
2. Make a batch of icing. Leave about a cup of icing aside. Dye the rest of the icing blue. I used two shades of blue, a lighter and a darker, to give the water more dimension. But this isn’t required!
3. Fit a pastry bag with the star tip — and pipe the blue icing onto each cupcake. If you use two shades of blue, fill half of your pastry bag with one shade and half with another — this will cause the two shades to blend and swirl when you pipe. If you have no idea what I’m talking about, see Sally’s great tutorial at Sally’s Baking Addiction.
4. Place a pretzel rod on each cupcake. Using a different pastry bag fitted with the small round pastry tip, pipe a curvy line of white icing onto each cupcake — starting at the rod.
5. Place a Goldfish cracker at the end of your curved line of white icing.

Note: if you don’t own pastry tips, it’s OK! You can spread the blue icing onto the cupcakes with a knife — and you can just snip the end off of a pastry bag with a scissors for the white icing step.